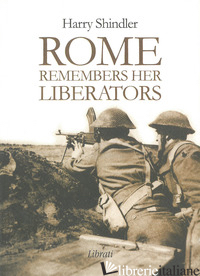 ... “Without doubt Shindler’s book is a unique publication, firstly, because it relates the story of a Monument which though a very recent event is related to dramatic events that took place more than half a century ago, and in memory of those ideals, in defence of which many young men from Europe and beyond gave their lives. Secondly, because it is written by a British soldier who took part in those events during six years of War Service and who returned to settle in Italy after taking part in the North African Campaign and the landing at Anzio on 22nd January 1944 and then on for the breakthrough of the Gothic Line in April 1945. Thirdly, because it is written with spontaneity and sometimes ingenuity, more appropriate to the spoken word than the written word, though being the result of a wise understanding of the Cause that gives sense to Life without fearing the future”... (From preface by Giuliano Vassalli)